History & Philosophy - The Bungalow on the Beach - 17th Century

Tranquebar is a Dutch, Danish, British Colonial heritage town of pristine beauty and perennial charm, situated on the Coromandel Coast in the Nagapattinam District in Tamil Nadu, South India. Tharangambadi, ‘the land of the singing waves’ as the town is known in Tamil, became Tranquebar for the Danes! This picturesque coastal town lies 15 km south of the ancient Chola port of Pumpuhar, and 15 km north of the former French comptoir of Karikal.

Motivated by huge profit made by the British and the Dutch East India Companies and driven by the desire of the Danish Monarch to play a dominant role in the world trade of that time, the Danish East India Company was formed in Denmark in 1616. In 1620 a treaty was entered into between Christian IV, the king of Denmark and Ragunatha Nayak, the king of Tanjore by which the Danes were given permission to erect a fortress at Tranquebar (the Dansborg Fort) and pay an annual rent of Rs. 3111/-. Till 1845 Tranquebar was a Danish Trade Settlement ruled by Governors, till the British took over its administration.

Since Lutheranism spread to the length and breadth of India from here and a mint started functioning from 1753, Tranquebar is called “The Gateway of Protestantism to India”. Impressed by the Mission work of the missionaries the king of Denmark sent Moravians to Tranquebar in 1760 to do missionary work in the Nicobar Islands. Since 43 out of 73 Moravians met with untimely death due to tropical heat and yellow fever the enterprise in Nicobar was closed down in 1803.

The 700 year old Masilamani Nathar Temple built in 1306 AD by the Pandya King Maravarman Kulasekara Pandyan is unique in its architecture. It was built combining Chinese architecture with Tamil architectural technique, possibly in an attempt to attract Chinese merchants who were visiting India. Tranquebar is also associated with personalities like the Governor General Peter Anker (a great painter), Catherine Worlee (the great beauty who was to become the Marchioness of Tallerand), Lady Clive, Mayuram Vedanayagam Pillai (the first Indian judge), Thillaiyadi Valliammai (a Tamil Satyagrahi who sacrificed her life in South Africa).

Tranquebar is also famous for its train that functioned from 1926 to 1986.

The Tsunami hit Tranquebar on 26.12.2004 and nearly 800 persons died, mostly women and children, but the 400 year old Danish Fort was not affected. 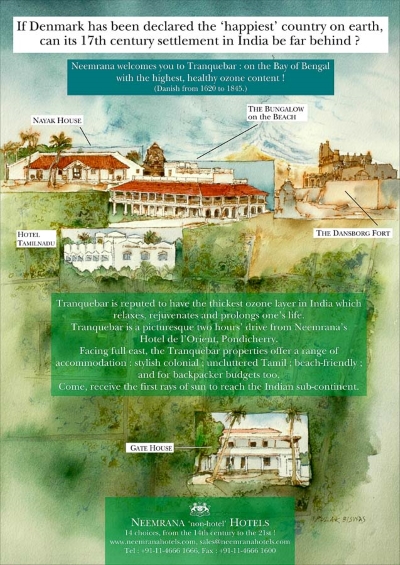